Thanks for contributing, you rock!

When it comes to open source, there are many different kinds of contributions that can be made, all of which are valuable. Here are a few guidelines that should help you as you prepare your contribution.

Before you can contribute to the codebase, you will need to fork the repo. This will look a bit different depending on what type of contribution you are making:

The following steps will get you set up to contribute changes to this repo:

Think You Found a Bug?

Please conform to the issue template and provide a clear path to reproduction with a code example. Best is a pull request with a failing test. Next best is a link to CodeSandbox or repository that illustrates the bug.

Please provide thoughtful comments and some sample code that show what you'd like to do with React Router in your app. It helps the conversation if you can show us how you're limited by the current API first before jumping to a conclusion about what needs to be changed and/or added.

We have learned by experience that small APIs are usually better, so we may be a little reluctant to add something new unless there's an obvious limitation with the current API. That being said, we are always anxious to hear about cases that we just haven't considered before, so please don't be shy! :)

Issue Not Getting Attention?

If you need a bug fixed and nobody is fixing it, your best bet is to provide a fix for it and make a pull request. Open source code belongs to all of us, and it's all of our responsibility to push it forward.

Pull requests need only the approval of two or more collaborators to be merged; when the PR author is a collaborator, that counts as one.

Important: When creating the PR in GitHub, make sure that you set the base to the correct branch. If you are submitting a PR that touches any code, this should be the dev branch. You set the base in GitHub when authoring the PR with the dropdown below the "Compare changes" heading: 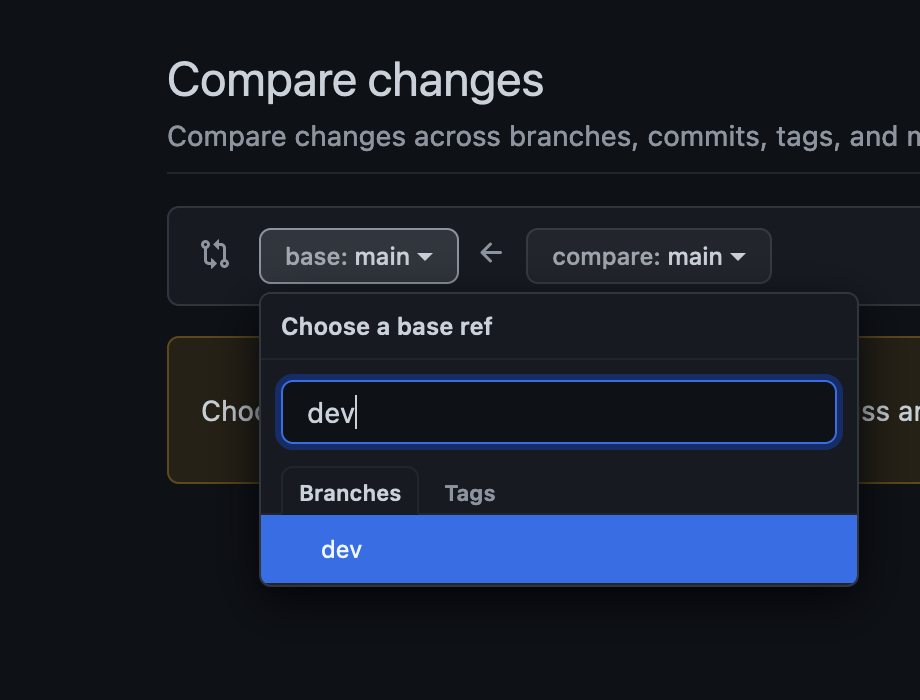 All commits that fix bugs or add features need a test.

All commits that change or add to the API must be done in a pull request that also updates all relevant examples and docs.

React Router uses a monorepo to host code for multiple packages. These packages live in the packages directory.

We use Yarn workspaces to manage installation of dependencies and running various scripts. To get everything installed, make sure you have Yarn (version 1) installed, and then run yarn or yarn install from the repo root.

Calling yarn build from the root directory will run the build, which should take only a few seconds. It's important to build all the packages together because react-router-dom and react-router-native both use react-router as a dependency.

Before running the tests, you need to run a build. After you build, running yarn test from the root directory will run every package's tests. If you want to run tests for a specific package, use yarn test --projects packages/<package-name>:

This repo maintains separate branches for different purposes. They will look something like this:

There may be other branches for various features and experimentation, but all of the magic happens from these branches.

When it's time to cut a new release, we follow a process based on our branching strategy depending on the type of release.

We create experimental releases from the current state of the dev branch. They can be installed by using the @next tag:

These releases will be automated as PRs are merged into the dev branch.

Sometimes we have a crucial bug that needs to be patched right away. If the bug affects the latest release, we can create a new version directly from main (or the relevant major release branch where the bug exists):